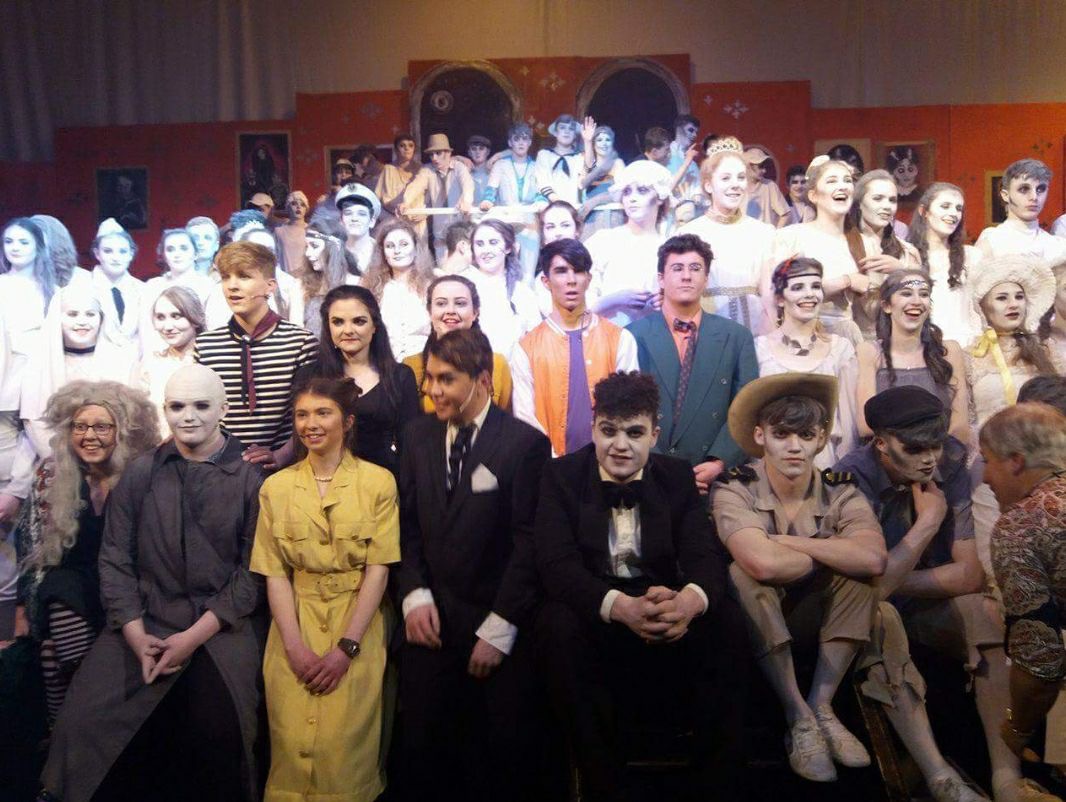 This year the Transition Year Musical was “The Addams Family”. The show tells the story of how Wednesday Addams, the ultimate princess of darkness, has grown up and fallen in love with Lucas Beineke, a sweet, smart young man from a respectable family- a man her parents have never met. And if that wasn’t upsetting enough, Wednesday confides in her dad and begs him not to tell her mother, thinking she’ll go mad and wreck the whole thing. Now Gomez Addams must do something he’s never done before-keep a secret from his beloved wife, Morticia. Everything will change for the whole family on the fateful night they host a dinner for Wednesday’s “normal” boyfriend and his parents.

At the beginning of the year, after the TY musical students learned that the show they would be performing was “The Addams Family”, the first thing they did before any auditions was have a look at the Broadway version of the opening number “When You’re an Addams” and learn that fully. Even during this, the talent was prominent and efforts were being made. When the auditioning process began, the bars and expectations had been set very high. A lot of brave, determined students auditioned for lead roles. During these, you could most definitely see the outstanding talent the 2016-2017 Transition Year students had to offer this school. After two, nerve racking, weeks of call backs and small scene performances in front of the class, the lead roles were cast to ten strong willed and remarkably talented individuals. We started by learning the opening song and dance number, “When You’re an Addams”. It took a lot of hard work and determination to get this number perfect as well as the other big dance number, “Full Disclosure”. There was a lot to learn for lead roles and chorus alike, meaning a lot of hard work had to be put in after school, during lunches and over the February midterm break. After a long six months of preparation, all of the hard work of the lead cast, chorus and the teachers involved, paid off. So much time and effort went into making sure all the dances and songs were perfected, even taking time out of classes, lunch times and the February midterm break, to get it all stage worthy. At the end of it all, it turned out to be an absolutely fantastic and extraordinary performance by the Transition Year students of 2016-2017, one that was so well received by the audiences. It will most certainly not be forgotten anytime soon.

Nothing would have been possible if it wasn’t for the relentless work and effort of all the teachers and crews involved- Ms. McNulty, who along with teaching all the songs and made sure the cast knew their lines, single handedly organised the student orchestra, which played all the songs perfectly and really had a positive effect on the show, Ms. Healy, who organised all the props and made sure that everything was backstage and on stage when needed, Ms. Hurley, who helped with teaching all the songs and who was very much involved also with making sure the leads knew what they were supposed to do, Ms. Donovan, who helped the chorus learn all their singing lines and knew when to come in and helped backstage making sure all the props went on and off stage and that the singing was loud enough back there, and Ms. Nevin, who came back to the school to give great help to all the cast and chorus with the singing.

Many thanks also go out to Ms. Ryan and Ms. Mortell’s art and set design crew, who painted the entire set and spent countless hours making sure it looked perfect for the performance to really get that creepy Addams Family feeling, it’s safe to say it was absolutely outstanding to look at, to the Coffee Brothers who came in during the midterm break and set up all the fabulous lights and sound systems that were seen and heard on the nights of the shows, all the microphones and speakers were provided by them. Thanks are also to be given to Ms. O’ Toole, who took the time to find and give costumes for every single member of the lead cast and chorus, they really looked amazing on stage. A thank you to Mr. McCaffrey and Mr. McCarthy and their stage crew who were made backstage throughout the shows making sure that everything was in order, props were ready to come off and go on stage, panels of canvas being moved and such, it really was a huge help, Mr. Tim Hartnett and Mr. John Cleary who took time to set up and built the stage,  and thanks go out to the fabulous show choreographer, Pam McGlynn, who took the time and had the patience to teach all the dances, and go back over and over them until they were finally show ready, it all worked out brilliantly in the end. To say the students involved were extremely grateful would be a massive understatement!

Through the musical we learned quite a bit about collaborating and how if you work hard, you can achieve anything. Also, through the musical, we made and cemented new friends and got to know new people. The musical gave us a newfound confidence and we found ourselves performing in front of thousands of people over the course of the shows when some of us wouldn’t have ever dreamed of singing or dancing for a crowd before. Before the musical, we had no idea of the amount of effort that goes in, between acting, lighting, sound, choreography, singing and costumes and to say that we’re grateful is an understatement.  It was an amazing Transition Year experience for most, a definite highlight of the year. A performance such as this one really won’t be forgotten easily or anytime soon.