A superbly talented and well balanced John the Baptist team were too sharp for the girls from West Cork on Wednesday last. Played in Mayfield down by the Lee John the Baptist led from start to finish, and were always in control of this entertaining final. 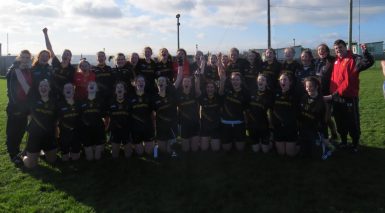 The girls had superb performances throughout the field. They were excellently led by inspirational captain and centre back Brid “Corkery,” Condon. A hat trick of goals from Clodagh Kirby were vital in deciding the outcome of this one. Clodagh is currently leading the votes for Ballon d’or 2015 after her amazing performance! Andrea O’Sullivan was a dominant figure on the 40 chipping in with some lovely individual scores. It seems Andrea is definitely the better half in her high profile Posh and Becks relationship! Also Emer McCarthy gave a great impression of David de Gea in goal. Emer made some excellent saves throughout the match , and even threw in a last minute penalty save just for good measure. John the Baptist had Trojan performances all over the pitch. Wave after wave of Bantry attacks crashed off Margaret Ryan. Margaret was heard roaring during the first half of the match “YOU SHALL NOT PASS!” Our midfield partnership of Megan O’Shea and Louise Ryan were the engine which drove the team on to final glory.

Special credit must also be paid to Mr. Dollery and Ms. Buckley. The work they have put into these girls has been relentless. This result will of course be of great satisfaction to the pair. (Also a hat tip to their tactical nous. Bantry simply could not come to terms with the 6-2-6 formation employed in this final! ) 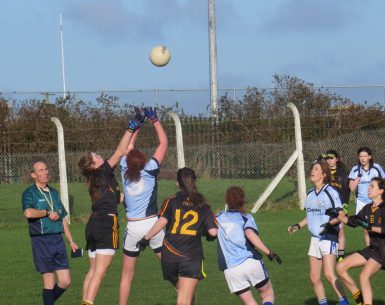 It is onwards and upwards for these girls. In her captain’s speech Bríd Condon spoke about a desire to go on and achieve All-Ireland victory. First up is an All-Ireland semi final on the 7th March. They are now two steps away from the ultimate glory.

Congratulations on a great achievement girls, and best of luck! Bring it home!