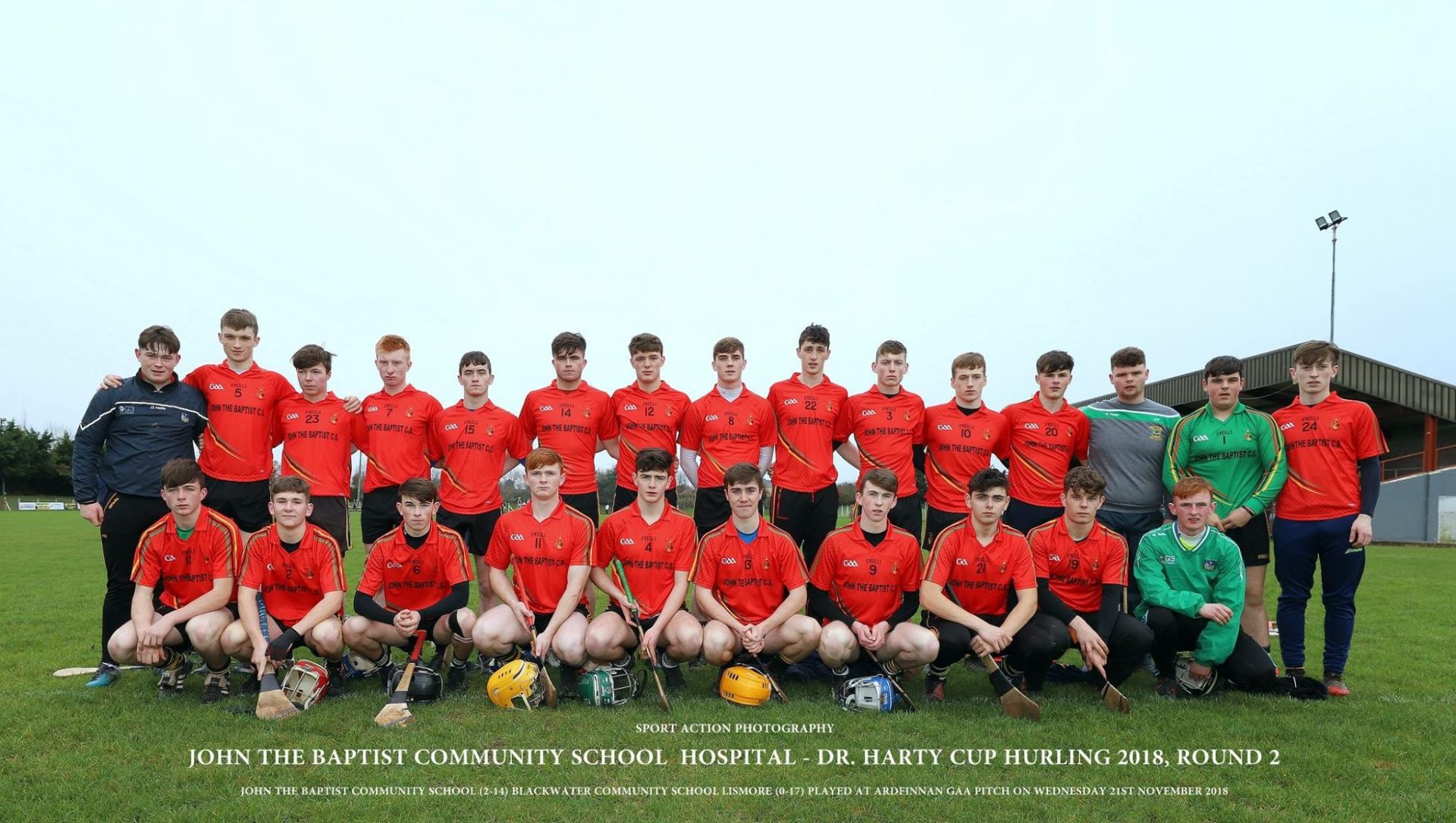 In the Harty Cup first round JTBCS defeated Our Ladies Templemore comprehensively, Templemore then went on to beat Blackwater in a similar fashion, logic would dictate that JTBCS would beat Blackwater with relative ease, unfortunately no one in Blackwater read the script. The Baptist Boys had to survive an unmerciful scare to come out on the right side of the final round result. Our wondrous Gaelic Games have a habit of turning up these statistical anomalies

Ardfinnan was the venue and the conditions were wet underfoot, one thinks that this may have had more than a bit part in dictating the pattern of the game. It was a day far removed from the previous round where the clear Autumnal day allowed for poetic free flowing hurling. This was a winter’s day against a Waterford team ready for a battle, they posed a question to the JTBCS boys “are ye up for the fight?”

JTBCS got off to a dream start; Aiden O’Heney made a great run at the Blackwater defence and selflessly squared the ball to the enigmatic Dylan O’Shea who sent the ball whistling into the Blackwater net inside two minutes. It seemed to be all going to plan, the fiery Blackwater team had other ideas, from the 10th to the 22nd minute JTBCS failed to score a single point, in this time the opposition tacked on seven unanswered points. Blackwater’s Aaron Ryan was the stand out player in this time and he finished the half with ten points, unfortunately seven of these came from placed balls, the JTBCS teams discipline was letting them down and stifling any momentum that they were attempting to build. These events led to JTBCS trailing at half time with the scores at 0-12 to 1-7. A mammoth task lay ahead of the JTBCS boys but from the look on Mr Deegan’s and Mr McCaffery’s faces as they strode across the field their mentors at least were determined that they would not succumb to the Blackwater onslaught.

JTBCS came out in the second half a refocused team, these are well campaigned players and it was not their first time in a dog fight. Early second half points by Brian and Oisín O’Grady settled the team, then Dylan O’Shea put the teams in deadlock, on the 45th minute Micheál Martin got an exemplary score to put the JTBCS boys ahead, finally they could sail off into the Ardfinnan sunset…..wrong. To Blackwater’s credit they never looked beaten; they levelled the game again on two occasions. Their defensive tactics meant that JTBCS remained frustrated. It was time to roll the dice and the JTBCS management showed that this is not a fifteen man game, it is about the collective. They brought on Peter Morrissey and Conor Burke and both impacted the game positively, Morrissey’s strength troubled the Blackwater backline and Burke popped over a sublime point to bring JTBCS one point ahead in the final quarter of the game.

Once again with 10 to play the teams were level, then came the most significant score of the game. After some great defensive work the ball was launched into the edge of the square, in all honesty it was what patrons would call a backs ball, high and looping not a major threat. It was going to take some imaginative thinking to get a score from it and as the ball made its way in, Oisín O’Grady had an other worldly clarity of thought. He decided the only job for it was to deftly overhead flick the ball into the net, and who were we to doubt him, he did just that. The Baptist Boys went three ahead and it was to remain this way for the remainder of the game. In hindsight this game may have been just what the doctor ordered and hopefully it may be a defining and character building moment for JTBCS to look back on. Next stop is the Quarter Finals and no team will fancy taking on the JTBCS charges.