Chloe O'Dwyer, a John the Baptist student, qualified as one of 74 entries out of 5,085 participants in this year's Doodle for Google competition. She was declared the winner in her age group after receiving the most public votes. 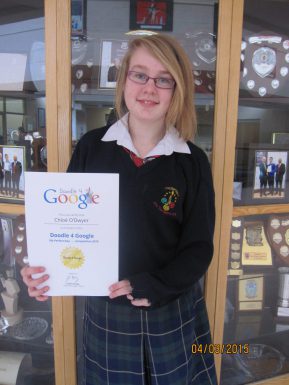 The theme of the competition was My Perfect Day and Chloe's winning doodle entitled 'Fairytale Fantasy' was inspired by her love of reading fairytale books when she was younger.

After attending the awards ceremony in Google offices Dublin and winning her category, Chloe took home a HP Chromebook for both herself and her teacher. In total there were 140,000 votes cast so Chloe must have received thousands!