The halls of John the Baptist C.S. have in the past featured many a strange sight; however, Friday 23rd saw the corridors alive with witches, the Village People, clowns and even the odd literary character to name but a few! To support the school's drive towards an awareness of positive mental health and the drive to become an ambassador school for Cycle Against Suicide, teachers donned an array of fancy costumes and scary outfits, entertaining and lifting the spirits of one and all.

The day also featurted a hard fought Celbrity Bainisteoir Blitz with Second Year teams competing under the able tuteledge of four teacher managers. Mr. Balfry's charges were victorious in the end and were presented their plaque by David McCarthy from the All Ireland U21 winning Limerick team, who also spoke about the importance of talking and awareness.

Remember, it's okay not be okay and it's absolutely to ask for help. 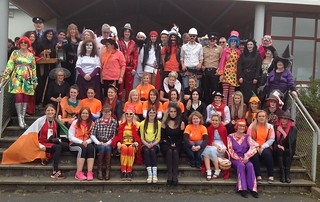 Click on the image above to see the full gallery