On Saturday last, the 19th January, John the Baptist Community School and Scoil Pól, Kilfinane contested the Munster Intermediate Camogie Final in Hospital, Co. Limerick.  This was a fiercely consented game.  Hospital began the scoring with a number of well taken points from Maedhbh O’Neill, but Kilfinane rallied and dictated the pace of the game for the second quarter. The score-line at half-time was: John the Baptist 0-9, Scoil Pól 0-4.
On the turn around, Kilfinane came out with all guns blazing, and sent two well taken points over the bar.  Hospital steadied the ship, and rallied with a number of points from play. Orlaith O’Donoghue and Grainne Ryan were covering huge ground at centerfield for the winners, and were ably assisted by a half-back line of Jackie Lynch, Audrey Dempsey and Annie Kemp.

Kilfinane continue to press, but time after time, their hearts were broken by the valiant defence of golie Eimear Daly, sisters, Áine and Caoimhe Donovan and Rachel Madden.  The Hospital forwards, Anna Bonar, Jackie Meade and Caoimhe O’Brien, were putting good moves together at this point and through great commitment and work rate from Erin Carroll, who was now playing as an extra mid-field, they held their lead.
Kilfinane never gave up and continued to attack Hospital. With three minutes to go, Kilfinane scored a good goal, leaving them only three points in arrears.  Could they get that second goal to draw the game?  Hospital was not going to let go of this one so easy!  From the puck out, the ball was played through Iona Dollery, having the game of her life, and went in as far as the full-forward line.  Aisling Browne, who was now at full-forward, held the ball up, and one of the players of the match – the outstanding Meadhbh O’Neill, took the ball on her hurley, and from that moment, there was no doubt in anyone’s mind that the ball was going to end up in the back of the net!!  A fantastic goal and a  superb performance from a player who had scored 1-11 out of the total 1-12. 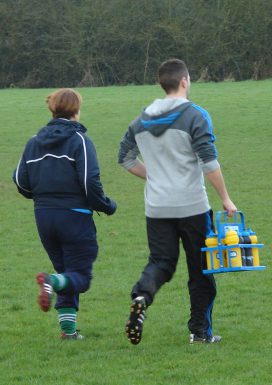 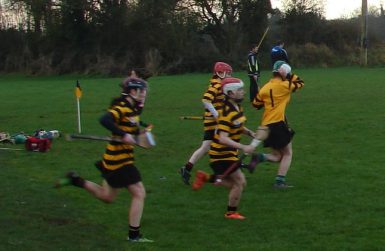 Well done to all the players and to their trainers Ms. Helen Clifford and Mr. Kevin Buckley. Thanks also to all those that came to support the team for the big game.