“Magical Munster title for the boys of JTBCS”

Waking this morning to the sound of torrential rain beating on the window sill, you could be forgiven for thinking “Will I bother getting up today at all?” This was most certainly not the case for the teachers and students of John the Baptist, where an air of excitement at the thoughts of Munster Final glory was palpable. At the beginning of the year, thoughts were that the school would be happy to compete at this level after being moved from the C grade after Munster Final hardship the year previous. It seems that this exemplary group of young people, with their management team of Ivor McCaffery and the Mighty Mick Quinn, didn't read the script and served up a feast of festive football.

Rathkeale was the venue for this hotly contested, breathless affair. The opening five minutes of the game were frantic with neither side looking like they were willing to give an inch. JTBCS defended stoically and the full back line of Jake Kennedy, Kyran O’Donnell and Daragh McNamara laid down the marker that Mounthawk would have to work hard for any score they were going to get. The deadlock was broken on six minutes by Patrick Byrne, who pointed from twenty five yards to give JTBCS the first score of the game. This score was cancelled out on eleven minutes by Mounthawk’s Damien Doherty. It was evident even at this early stage that this game was going to be hard fought. This was followed in quick succession by a point from a Mounthawk man with a very famous surname – Alex O’Shea.

Mounthawk were getting a real foothold in the game, JTBCS were under real pressure. The backs were standing strong but surely they couldn't hold out? Enter stage left Killian Real, who burst onto the scene with two sublimely taken goals on thirteen and eighteen minutes. The first came from a powerful forward run from the towering Eoin O’Mahoney, who laid the ball off unselfishly to Real, who cleverly peeled off his man and slotted home from ten yards. The second came from a high ball when the cunning Real pounced upon a defensive error and was left one-on-one with the keeper; he did what Killian Real does and smashed the ball to the roof of the net. JTBCS were six points up – surely they would cruise smoothly to victory? I think not, where would the drama be in that?

JTBCS would actually remain scoreless for the remainder of the half with Mounthawk getting six unanswered points, the pick of the bunch being two beautifully struck points from the cultured left boot of Patrick Dowling, followed by two more from the ever threatening O’Shea. Half time couldn't come quick enough for JTBCS and Mounthawk added points from Damien Doherty. Just before the break, they levelled proceedings with a well worked 45 routine slotted over by Padraic Linnane.

There was an air of impending gloom from the supporters at half time in the light of Mounthawk’s dominance in the closing stages of the half. If not for the cat like reflexes of Josh Sheehan in goal, JTBCS would have been behind. It was hard to see how JTBCS could continue to answer the questions raised. A speech with levels of inspiration on a par with the words of Martin Luther King must have been uttered from Mr Quinn and Mr. McCaffery at half time because the young men of JTBCS came out like men possessed after the break, and from the opening minute, looked like they were never going to be beaten.

An onslaught on the Mounthawk goal ensued in the opening minutes of the second half; the half forward line of Killian O’Shea, David O’Connell and Patrick Byrne were running the Mounthawk boys ragged and supplying quality ball to the inside forward line. JTBCS could have been accused of squandering a couple of chances but this was rectified when Tyrique McNamarra put the ball low into the bottom corner of the Mounthawk net. This score was followed up by four points, a brace from both Eoin O’Mahoney and Killian O’Shea. JTBCS were really starting to turn the screw and hard work from all meant that the ball was in the Mounthawk half for a large proportion of the opening stages of the second half. On the subject of outstanding hard work, this is an apt time to mention the heroics of Sean Erasmus in midfield, who must have covered every blade of grass in Rathkeale and was a constant thorn in the side of Mounthawk.

JTBCS were never going to be able to continue at this pace and it was starting to show on the field, with both David O’Connell and Eoin O’Mahoney starting to show war wounds and Mounthawk about to enter a purple patch. For a ten minute period, the Kerry Boys rallied the troops and dominated possession. The JTBCS backs did magnificently during this dominance to hold them to one point, which came in the form of a pointed free on the 47th minute from midfielder Darragh Courtney. The half back line of Dean Heffernan, Michael Martin and Aiden McNamarra must be celebrated for their tenacious defence at this time.

In this period, the high intensity started to take its toll: both Patrick Byrne and Eoin O’Mahoney had given everything to the cause and were replaced by James Halvey and Daniel Blade. Also, the tireless and skilful Aiden O’Heney was replaced by Shane Bradshaw. It says a lot about the strength and depth of the squad that the management team could bring on such able replacements.

With five minutes remaining in the game, Mounthawk were starting to get desperate; they pounded the ball towards the JTBCS goal to no avail. At one point, the crowd reported that they could hear a collective “you shall not pass” shouted from the immensely brave JTBCS defence. An inspirational score for JTBCS came in the height of the Mounthawk pressure, taken beautifully by Michael Martin, who excelled throughout the game. It was last chance saloon for Mounthawk now with goals needed. Their pressure finally paid off when they were awarded a penalty. Josh Sheehan was the lone man facing Mounthawk’s Alex O’Shea; could he possibly stem their momentum? In all honesty, it was never in doubt. The penalty was struck well and looked destined to nestle in the right hand corner, not on Sheehan’s watch! He soared across the goal with the grace of a ballet dancer and blocked the shot. Mounthawk men barrelled towards the goal though but Josh was not in the mood and cleared the ball out over the sideline to rapturous applause and gasps of approval.

The history-making dream had come to fruition for JTBCS and the outpouring of emotion at the final whistle will be harped back to for years to come. As captain fantastic Eoin O’Mahoney held the cup aloft, the amazing achievement of this group of boys began to sink in; they are the first ever in the history of the school to win a Munster Title at this level. The winning mentality, set by the JTBCS girls in the previous two years, has been adopted by the boys. A massive congratulations must be extended to all involved in the panel. It must be said that this group are a credit to the school, their hard working spirit and never-say-die attitude are things that make the school what it is. The management team of Michael Quinn and Ivor McCaffery also have to be acknowledged for the massive amount of work they have put into this group; they have guided them and seen them grow throughout the season and the influence they have had on their young lives cannot be underestimated. They have helped mould Munster Champions and who's to say that they will stop there. The school has a wealth of talent and there is no doubt in my mind that they will continue to do JTBCS proud on the sports field. 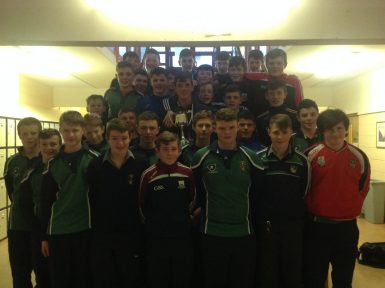