The Junior Ladies complete an epic double Munster win for the school in a thrilling encounter. 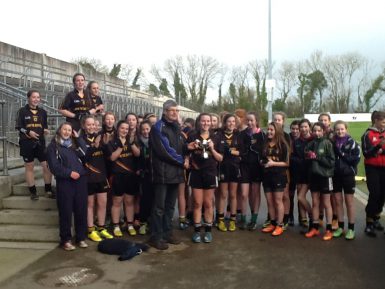 On a cold Friday afternoon the girls of John the Baptist took on Christ the King striving to win the schools 2nd Munster final in just 9 days. Mallow was the venue for what was an exciting and hard fought contest.

The game from the throw in was played at an intense pace Christ King were well up for it and John the Baptist were not backing down. The first score of the game came from a free won by Anna Rose Kennedy and it was confidently dispatched by the ever present mid field Dynamo Andrea O’Sullivan. A Kennedy sister special was the next score of the game with Anna Rose running at the heart of the Christ King defence and laying the ball off to her sister Caitlin who placed it neatly in the back of the net.

Hospital were well on top at this stage, the full back line held tough and the half back line tormented Christ King with their impressive work rate. This work led to more scores for Hospital with Sara Morrissey slotting over a couple of points and setting up Andrea O’Sullivan for another great goal. At this point you would be forgiven for thinking the game was over but Christ King had other ideas. Christ King rallied in the closing ten minutes of the half with 2:2 without response and they went into half time trailing by a single point. Impressive for Christ King at this point was the full forward Saoirse Noonan who ended the day with a personal tally of 2:4 and player of the match. The game was balanced on a knife edge, setting up an epic second half.

Whatever was said to the Hospital team at half time seemed to have the desired effect. They came out with all guns blazing – Grainne Ryan, among others, played a captain’s part and ran at the Christ King defence; this lead to more scores for Hospital one of which was a powerful Sara Morrissey goal. The score of the game also came out of this period of dominance: Andrea O’ Sullivan went on another run towards the heart of the Christ King defence and she struck the ball toward the goal, the ball was met on the half volley by Caitlin Kennedy and she scored a point that Stephaine Roche would have been proud of.

Once again, it looked like Hospital might sail off into the sunset but credit is due to Christ King – they never gave up. They were five points down with just over five minutes to go and they were awarded a penalty which they put away. GAME ON!!! Now began an onslaught on the Hospital goal; great saves from Maeve Barry and Caoimhe O’Brien in goal, kept Hospital in the game. Christ King were relentless though, and they kept running at the Hospital goal. Credit to our girls, they did not give in. They were brave in defence throwing everything on the line and combining this with some clever tactics, like the excellent Ava Hartigan getting the referee to tie her laces with one minute to play. This led to John the Baptist coming out victorious in the end by a solitary point.

Great credit is due to this bunch of young people who continually do the school proud. Credit is also due to their hard working mentors Mr. Dollery and Ms. Buckley who have put a huge amount of effort into the team and took them out training in wind, rain and even snow, so that they could complete an epic Munster double. The John the Baptist ladies have been really bringing home the bacon of late! 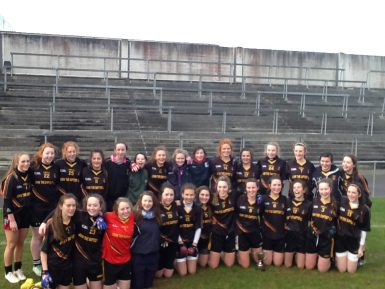 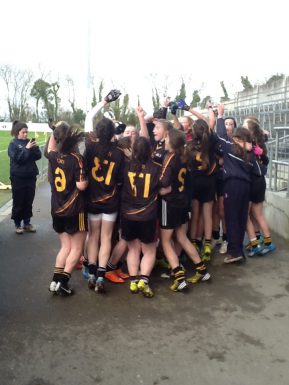