The Crean Challenge – the experience of a lifetime 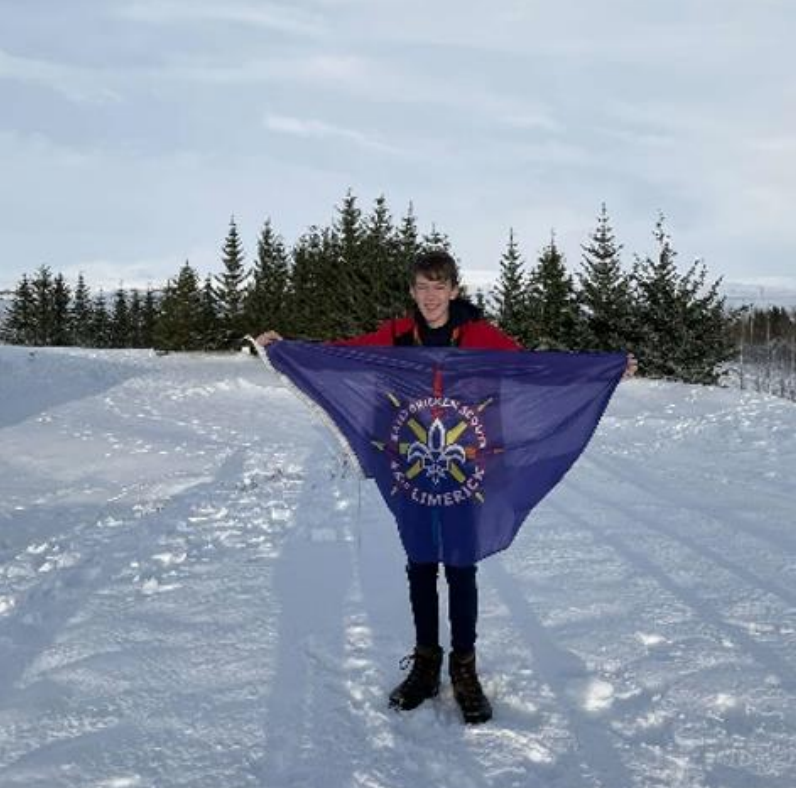 Well done to Cathal Ward, Third Year, who completed the gruelling Crean Challenge with Scouting Ireland over the midterm break. See below for Cathal’s own account of this incredible feat!

My name is Cathal Ward from Ballybricken 46th Scouts. I am 15 years old. I have recently completed the Crean Challenge Expedition which is an annual Scouting Ireland Challenge taking place over 6 months, which culminated in a week-long expedition to Iceland starting 19th February 2022. 32 scouts from across Ireland participated with the support of a team of 11 Scout leaders. In the six months leading up to the Iceland Expedition there were four training camps with the Crean Team in Castleconnell, the Galtee Mountains, the Wicklow Mountains and Carrauntoohill. I also completed four individual training hikes and two projects in preparation for the Icelandic expedition. On day one in Iceland we had an interesting start – we landed in the middle of a weather warning, with very strong winds and heavy snow – on the trip to the Úlfljótsvatn Scout Centre we had had to stop and wait for an all-wheel drive bus to come and take us the rest of the way! This scout centre, located on the shore Úlfljótsvatn lake, 75km east of Reykjavik, was our base for most of the week – it had dorms and facilities for lots of outdoor activities. During the week we did many activities and learned and experienced about winter hiking and camping. On our second night we slept in tents, which meant digging out the snow to get down to the earth to pitch the tents and building a snow wall to shield them from wind and snow. Despite the freezing temperatures outside it was actually comfortable in the tents.

We did two hikes over the week. The first was a training hike that was originally meant to go around the lake. However, the weather turned against us with strong wind and snowfall closing in which forced us to return to our base. That hike gave us many lessons about preparing for a hike and knowing the differences between hiking in Ireland and in the snow and unpredictable weather of Iceland. The second hike was the main expedition hike. The original plan was to complete a one-way hike that would end at mountain huts far away from Úlfljótsvatn where we would stay for the night. Unfortunately, severe storms during the week had caused an avalanche warning in the area which made part of the route unsafe. Instead of the original hike we did a different route in the opposite direction and then returned to Úlfljótsvatn. Having learned our lesson from the first hike and with support and advice from the local Mountain Rescue unit we set off a 6.45am in the dark. Thankfully the weather was much kinder with little snowfall and light wind. This made the hike much better and more fun than the first. We still had to take safety precautions though. Two mountain rescue people hiked with the front and back patrol, and we had to wear crampons on our boots due to the frozen snow surface, a new experience for us all. Overall, the hikes were a great experience.

The week wasn’t all work though, most days included some fun activities – we did archery, learned mountaineering rope techniques, had movie and games nights, went to a geothermal swimming pool and sampled some Icelandic traditional foods- sheep head, whale blubber, fermented shark and sheep’s testicle! For the last two nights we moved to a Scout Centre in the capital, Reykjavik. On the final night there was an award ceremony where the awards for completing the challenge were awarded. The award is given in three levels:- Certificate; Certificate and badge; Certificate, badge and Medal. The awards were presented by the Chief Scout of Ireland, who had travelled out during the week and joined us on the expedition hike. Everyone this year got the full award, Certificate, Badge and Medal which doesn’t happen every year, so we were all very happy and very relieved.

We didn’t sleep on the final night because we had to leave for the airport at 3am to get our flight home – we all had a great craic that night. We got a great welcome home at Dublin Airport, though I was sorry that the week was over. The Crean Challenge has been an incredible experience and like nothing I have ever done. I have learned so much, had so many experiences and met so many people and new friends. This has definitely been the best thing I’ve done in scouting so far and probably the best thing I’ve ever done. I can’t thank the Crean Team, my Ballybricken leaders and the other leaders in Limerick who have helped me enough.